What Does High Speed Rail Mean for DC2RVA?

One of the more frequent questions we receive for the DC2RVA project is why is DRPT not pursuing true high speed rail similar to what is seen in Europe and Japan?

The answer to this question is tied to the history of decisions made by the southeast states and the Federal Railroad Administration in the context of the overall Southeast High Speed Rail (SEHSR) corridor.

The Washington, D.C. to Richmond segment is just one of a handful of studies designed to evaluate specific improvements within the SEHSR corridor. Because the SEHSR corridor is roughly 500 miles long, and being developed by several states with different development schedules, the FRA determined that it was necessary to conduct analysis of the corridor in two tiers. The proposed SEHSR project involved the development, implementation, and operation of high speed rail service in the approximately 500-mile travel corridor from Washington, D.C., through Richmond, VA and Raleigh, NC to Charlotte, NC.  The environmental study of this project resulted in the SEHSR Tier I Environmental Impact Statement (EIS) in 2002. The Tier I SEHSR EIS evaluated and decided the major corridor-wide or big picture questions, such as adopting an incremental approach, using conventional powered locomotives, and utilizing existing rail corridors. Several Tier II studies, including the DC2RVA Tier II EIS project, are in various stages of development.

The second option, All New High Speed Rail, represented an advanced rail passenger system on almost completely new right-of-way using state-of-the-art vehicles that could attain speeds closer to 200 mph. This option closely mirrored the type of high speed rail one would see in Europe or Japan.

FRA determined that  implementing this option would encounter several barriers:

These barriers led DRPT, Virginia DOT, North Carolina DOT, and FRA to dismiss All New High Speed Rail as a viable solution and did not consider it for further analysis.

The implementation option that was selected as part of the Tier I SEHSR EIS and that guides the DC2RVA project is the Incremental Implementation option. The incremental approach includes upgrading and utilizing existing railroad to the greatest extent possible to allow intercity passenger trains to achieve speeds up to 110 mph where safe and practical. As is true in the DC2RVA corridor, most of the existing railroad is owned by freight railroad companies and has active freight traffic, which would coexist with the passenger service. DRPT and FRA determined that because of the level of freight, commuter rail, and intercity passenger rail in the DC2RVA corridor, this section would be designed for a maximum authorized speed of 90 mph.

The Incremental Implementation option was chosen because it:

Taking direction from and building upon the Tier I Record of Decision, DC2RVA is working to improve reliability, frequency, and travel time while using the existing rail corridor and infrastructure to the extent possible. This does not rule out the opportunity for future studies and planning for true high speed rail as the travel need develops.

During the DC2RVA Scoping process, DRPT received several public and agency comments that suggested evaluating bypasses at two known bottlenecks along the corridor, Fredericksburg and Ashland, to assist in achieving improved reliability and frequency of trains and reduced trip time. Multiple options were evaluated through a four-stage screening process, which included public outreach. The process helped DRPT formulate the two bypass alternatives that are being evaluated in the Draft EIS. The options that were screened out and not carried forward for further review will be documented in the Alternatives Technical Report, which will be an appendix to the Draft EIS.

Many people have also asked to review detailed information for the options that were screened out and the alternatives that are still being evaluated. Information on all alternatives, both those being considered in the EIS as well as those that were dismissed, will be in the Draft EIS. Once the Draft EIS is published (scheduled for late 2016), there will be a period of at least 45 days during which FRA and DRPT will hold public meetings to discuss the Draft EIS and accept comments. All comments received on the Draft EIS will be addressed in the Final EIS. 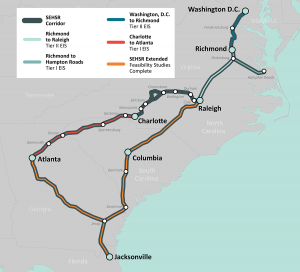 USDOT defines high speed rail as intercity passenger rail service that is time-competitive with other modes on a door-to-door basis for trips in the approximate range of 100 to 500 miles. This is a market-based, not a speed-based definition: it recognizes that the opportunities and requirements for high speed rail differ markedly among different pairs of cities.